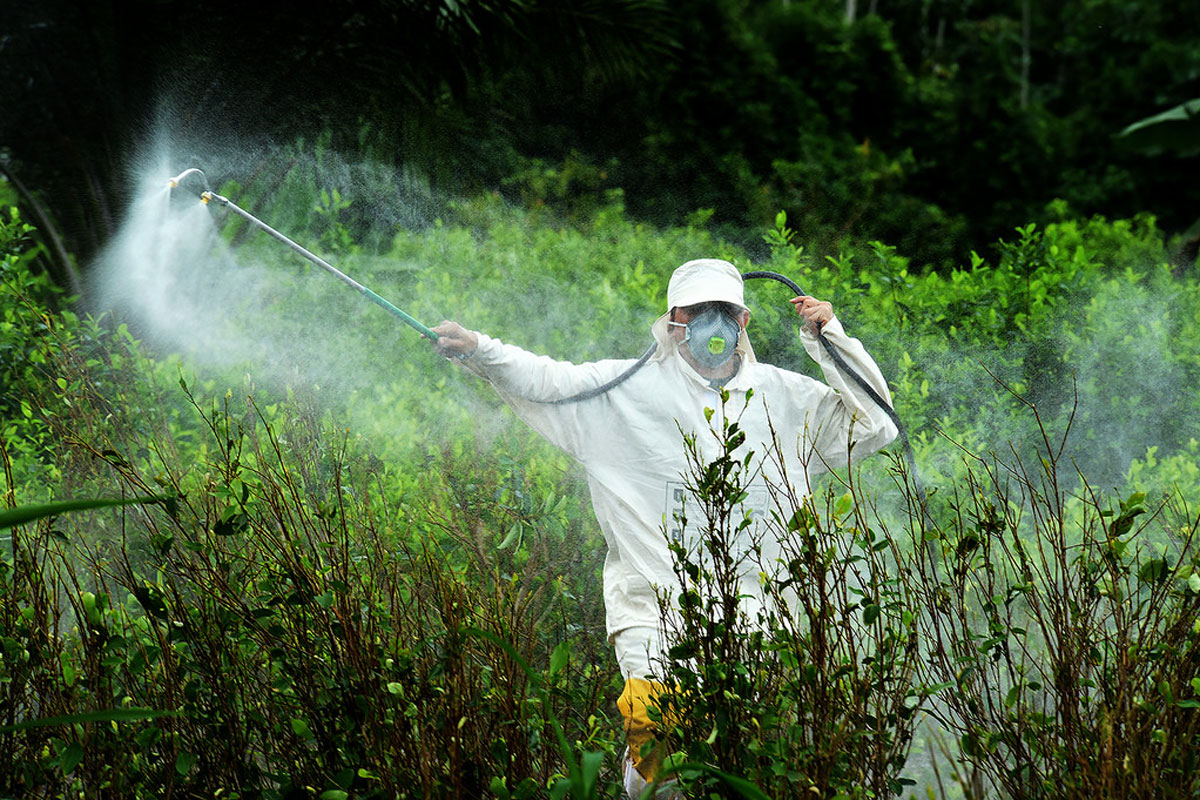 Glyphosate is the most common type of herbicide and crop desiccant used around the world in the agricultural industry to wipe out weeds and unwanted plants in cultivated fields. According to the international agency for research on cancer (IARC) it is “probably carcinogenic”, while the EFSA (European Food Safety Authority) made an opposing evaluation. Recently the news that the European Parliament blocked a request to extend the authorisation for the herbicide for 10 years with an immediate veto on domestic use by the year 2022 for agriculture.

The grain we use at Molini Riggi, however comes from organic farming where the use of synthetic products such as glyphosate is strictly forbidden. We asked our laboratory manager and technician Valeria Urso to understand more about the issue of glyphosate.

Glyphosate is the active ingredient in a well know herbicide that was introduced to farming in the 1960s by the multinational company Monsanto, with the commercial name of RoundUp. In 2011 the patent owned by Monsanto expired and today there are around 750 products on the market with this active ingredient with an estimated market value of 5.4 million dollars.

How does glyphosate work?

Glyphosate, widely used in pesticides is a systemic herbicide, i.e. once it has been absorbed by the leaves and roots it reaches every part of the plant and within a few weeks they dry completely. In addition, it is defined as “total”, because it can act in a non-selective way and therefore eliminate all kinds of vegetation thus extending the possibilities for its use: in agricultural crops (arable and horticultural; applied generally pre-sowing to eliminate weeds; as a desiccant pre-harvest to accelerate and/or standardise ripening), even in urban gardens and parks to keep roads and railways free from weeds. Today it is the most commonly used herbicide in the world (in 140 countries over the world including all of Europe.

Then new varieties of GMO allowed for the use of glyphosate…

Given their broad spectrum of activity Monsanto at the time selected and marketed new varieties of GMO that were resistant to glyphosate (soya, corn and cotton), allowing farmers to use the herbicide without damaging their crops.

How did IARC (the International Agency for Research on Cancer) react?

In 2015 a group of experts at IARC, the international agency that is part of the WHO (World Health Organisation), examined studies related to possible effects on mankind declaring it was dangerous and inserting it among the substances that were “probably carcinogenic” in category 2° (where we can also find DDT, anabolic steroids, emissions from high temperature frying, red meat and emissions from domestic wood burning fireplaces).

The EFSA on the other hand expressed a different opinion…

Again in 2015, the EAFS (European Authority for Food Safety) conducted another technical evaluation declaring that “it is improbable that glyphosate constitutes a carcinogenic hazard to mankind”, despite the fact that as a precautionary measure they placed new levels of security and tighter controls on glyphosate levels in food.

Then the WHO and the FAO joined in…

In 2016 the WHO and the FAO (Food and Agricultural Organisation of the United Nations) conducted a joint analysis and came to the conclusion that “it is improbable that glyphosate constitutes a risk of cancer for mankind as a result of exposure through food”.

Citizens and environmentalists were all in favour of banning the pesticide and a few days ago the European Parliament requested a complete ban on glyphosate based pesticides by December 2022 and immediate restrictions on the use of the substance, opposing the proposals of the European Commission to renew the licence for the herbicide for 10 years from the 15 of December of this year, when the current licence expires…

Yes. It will start with a ban on domestic use, then on farming when organic alternatives for weed control are available (for example integrated pest management systems). Pending the vote by the representatives of the EU member states on the issue some countries have already taken precautionary measures to reduce inappropriate use of products containing glyphosate. In Holland sales to private individuals for domestic use has been banned since 2014 while there are no limits in the professional environment; in France nurseries and garden shops were asked to not display glyphosate on shelves accessible to the public; in Italy a decree by the Ministry of Health in 2016 established that the herbicide could not be used in areas “visited by the public or by vulnerable groups such as parks, gardens, sports grounds and recreation areas, children’s playgrounds, internal courtyards and green areas inside schools and health facilities”.

CONTINUE READING > WHY MOLINI RIGGI DOES NOT USE GLYPHOSATE